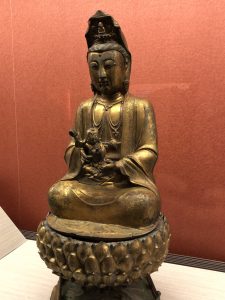 Lha Bab Duchen falls on Nov 19th this year. One of the four major Tibetan Buddhist holidays, it marks the time Buddha went to the Tushita Heaven to teach his mother and then returns to his Sangha in our realm. Our special holidays honor Buddha’s birth, first teaching, Enlightenment, the miracles he displayed, his death and this journey to take spiritual care of his mother who had died giving birth to him.

Often when we tell the life story of the Buddha we begin with Buddha/Siddhartha leaving his family, just after his child was born, to find enlightenment.  As westerners, we hear this story through the lens of our culture and conflate it with the classic “hero’s journey” or suspect the abandonment as lacking in compassion.  Lha Bab Duchen more normally depicts Buddhas return to our realm after teaching his mother in the Tushita heaven realm. On Lha Bab Duchen, we can contemplate Buddha’s family story in a way that illuminates inclusion.

As we delve deeper into Buddha’s life, we see that it also includes his aunt, Mahaprajnapati, his wife Yasodhara, and the Naga Princess, a being from a water realm. All three attained enlightenment, and they represent the realities of many women’s lives.  Yasodhara, his wife, knowingly supported the unique conditions that allowed Siddhartha to achieve his potential, enlightenment, understanding the benefit for all beings. Mahaprajnapati, his aunt, raised Prince Siddhartha as a child (before he became the Buddha) and accepted the responsibility of ruling the country as queen after her husband died. She accepted a life of responsibility due to compassion. Completing worldly responsibilities, Mahaprajapati became the first nun and Yasodhara followed her. They became enlightened practicing within the nun’s community.

Finally, the Naga Princess can further demonstrate the holiness within “other” or 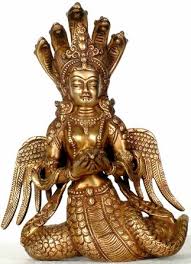 outsider. People of many clans and tribes joined the monastic community.  The Naga Princess was of another race of beings. Said to be his best student, she was an eight-year-old child of the dragon people, depicted as half dragon half human.  She defied all norms by demonstrating publicly and fearlessly, her profound understanding of the Dharma. When challenged to become a man in order to receive enlightenment she switched gender and then she switched back. What is gender she asked the assembly, thus destroying their ignorance.

All these women became enlightened, equal in spiritual understanding. The subtle teaching of this holiday is non dual understanding of spiritual capacity among genders and differences. There is no lesser Enlightenment, there is realization and nonrealization.

When we acknowledge the inherent holiness within all beings, we see that we are all included in Buddha’s story. This makes a difference in how we see ourselves and others. We are all the hero journeying in our own unique way towards recognizing our inner perfection and we are at the same time interconnected.