During the recent Drikung Monlam in Arizona, 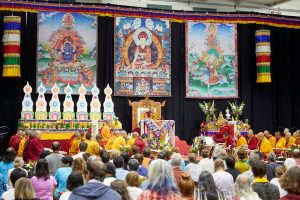 HH Drikung Chetsang Rinpoche Kyabgon outlined his advice for contemporary practitioners and new directions for how we introduce meditation as we embark upon the 801st year of the Drikung Lineage. He made many significant points and these are the ones that I took to heart. 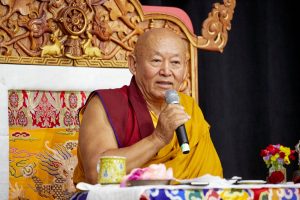 Return to the Sutras, the original teachings of Buddha.  In the Tibetan system, we rely on treatises of enlightened Indian and Tibetan masters and commentaries on the works of extraordinary philosophers, yet often neglect the original instructions of Buddha. His Holiness is instituting training for young leaders, particularly lay people. He has designed an intensive short retreat with a rigorous schedule that introduces Calm Abiding or Shamatha meditation thoroughly from the perspective of the Three Yanas. Those trained are then encouraged to teach others. This makes meditation accessible with a clear practice path for busy lay life.

Monastics in the US have been in dialogue for 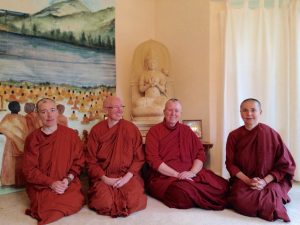 many years,  improving our understanding of Buddhism.  Following His Holiness’s personal advice to me on mahamudra, for the past two years I have been training in the sutra tradition. In particular, I have been studying and practicing the Four Foundations of Mindfulness as taught in the Satipatthana Sutra. We have in our Fivefold Mahamudra training, many references to post meditation mindfulness. However, we do not often teach the methods of walking, standing and lying down meditation postures in the same detail as the early buddhists for whom (along with sitting meditation) is their main practice. Nor do we focus on the original training using Buddha’s words to lay and monastic alike, on the mental states that hinder calm abiding.  It is refreshing and encouraging to return to Buddha’s original words.  Through the training and practice from the sutras, I have greatly expanded the depth of my own understanding of the subtle mental occurrences that distract from single pointed concentration.

Read Widely HH Chetsang Rinpoche has already written a book on Zen meditation and is having other works of significant teachers of other lineages translated into Tibetan, notably Thich Nhat Hanh.

Protect the Environment His Holiness gave a hopeful perspective, encouraged by there worldwide concern for the planet that has awakened and the resulting changes in our actions. Further , in Buddhism, we train in protecting life, often 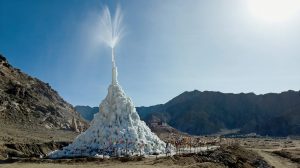 going to great lengths to rescue animals and insects. His Holiness pointed out that this is very good of course, but can result in both good and bad karma as the rescued animal can be re-caught and killed at another time.

With his Go Green program, His Holiness is introducing organic gardening techniques along with the spiritual teaching of non harm by eliminating the pesticides that kill countless insects and poison the waters. He finds a family that is willing to try in each village and then has the success of those crops encourage other families to go green. Appointed as a Mountain Partnership Ambassador representing the Himalayas by the UN, he is bringing his methods to mountain regions all over the world.

In Ladakh, his homeland, he introduced the concept of ice stupas to address problems of global warming. The glaciers are so reduced, that the waters in spring no longer reach the valley where farmers have counted on the runoff for farming for centuries. Building ice stupas, he incorporated the spiritual beliefs and customs to create ice stupas that slowly melt and and save the food sources for coming generations. He emphasized that when we understand that the planet and nature sustain all life, every act we do to protect the environment becomes of great virtue, sustaining countless beings.